AR Triggers: What’s the Difference Between Single-Stage and Two-Stage?

Almost every off-the-shelf AR rifle comes with a mil-spec fire control group (FCG), commonly called a
trigger. It is a “group” because it is made up of 8 different components. The trigger, the hammer,
the disconnect, 3 springs and 2 pins. For the average shooter who does a few range days a year at 100
yards or less punching paper this is a fine setup.

The major drawbacks are that they have a heavy pull (mil-spec is 5.5 to 8.5 lbs ). They also tend to have a lot of creep or take-up (the length the trigger travels before the hammer releases). The advantage is that they are durable and will last probably the life of your rifle. Mil-spec triggers are single-stage triggers but have a lot of take-up due to the extended length of the sear point on the hammer.

So you have decided to upgrade your trigger. Where do you turn? Where do you start? First we
recommend, if you can, trying several styles. Ask your buddies or go to ranges that let you rent set-up
guns. Some big box stores will have displays set up with various triggers in test jigs that you can sample
as well. This will prevent you from spending a small fortune and getting what you want the first time. Do
some research and see which style best fits your needs.

Single-Stage vs. Two-Stage: What’s the Difference?

The most basic explanation is this: Single-stage will have one consistent weight of pull from start of trigger press until it “breaks” or fires the gun. Two-stage triggers have two different weights of pull, the take-up stage and the second stage or “wall” as it is commonly referred to. This is much like most standard pistol triggers.

A good single-stage trigger will have almost imperceptible take up or “zero creep” as they are commonly referred to. They will also have very low weight of pull. Some as low 2 to 2.5 lbs. The act of the gun firing commonly called the “break” should really come as a surprise. It should just all of the sudden “break” as steady pressure is applied to the trigger. You’ll often hear someone say “It breaks like a glass rod”. This helps with slapping the trigger and flinching in anticipation of firing and recoil. Super low-weight triggers are mostly for long range, competition, target shooting and hunting applications and we do not recommended for home defense guns to prevent accidental discharge in a tense situation.

A good two-stage trigger will have a certain amount of first-stage take up, or travel, at a lower weight than the second-stage. The weight should be consistent through the take up regardless of length of take up or pull. Once the trigger hits the “wall” or the second-stage the weight of pull will increase. You simply pull through the wall. Again like the single-stage there should be almost imperceptible movement to the “break” point and still be a consistent, but a lighter pull weight than mil-spec.

Decide what is best for you and go for it. A new trigger in our opinion is one of the best upgrades you can do to improve form, function and accuracy of your shooting. There are ton of options out there from the low $100’s to $300-$400. Budget, function of use and personal preference are your deciding factors. We can’t say it enough: have fun and shoot safely.

What do you prefer? Single-stage or two-stage? Let us know in our online gun group!

1 thought on “AR Triggers: What’s the Difference Between Single-Stage and Two-Stage?” 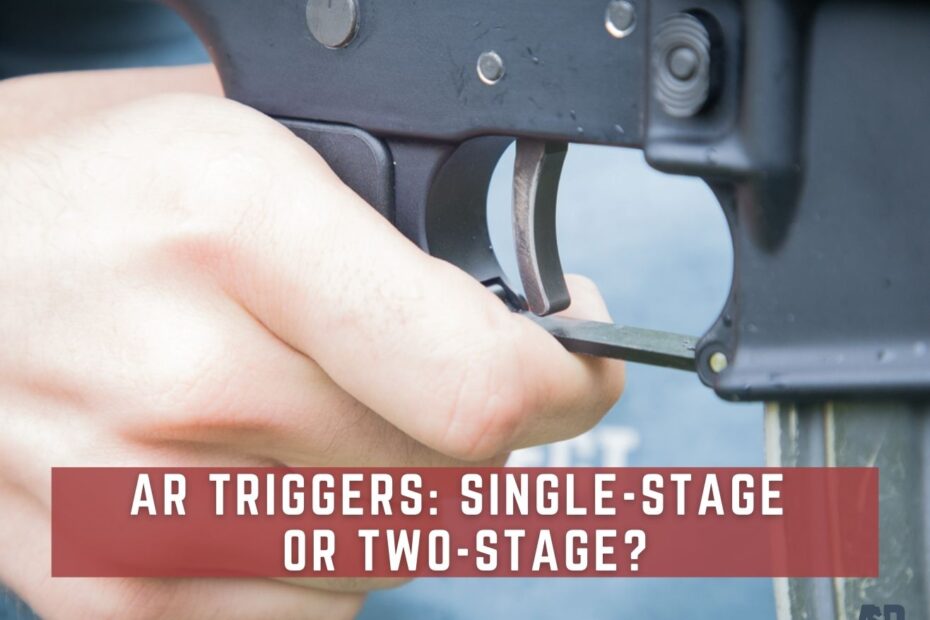